Vince: Three reasons to be optimistic 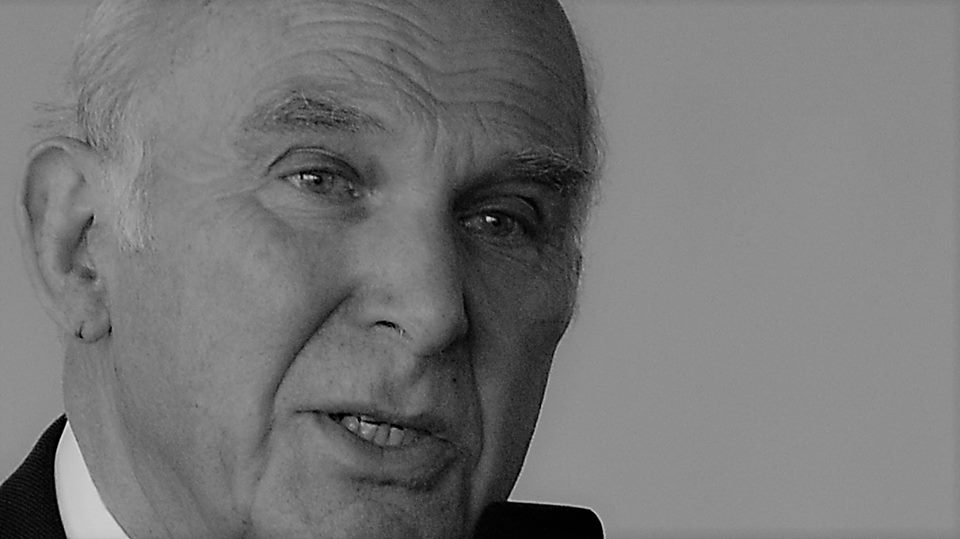 He spoke of three reasons why he was feeling optimistic as newly appointed Leader of the Lib Dems.

Firstly, there was a ‘yawning gap’ in the centre ground of British politics – with the Conservative Party under the thumb of the ‘Brexit zealots’ and having forged the alliance with the DUP they had wiped out all the work of Cameron to ‘detoxify the Tories’.

The Labour Party on the other hand, undoubtedly resurgent, (‘we all underestimated them’), were under the control of the hard left and much further to the left than in the era of Michael Foot. Labour Party thinking today was, ‘closer to the Bolivarian Party in Venezuela’. And both parties were, together, committed to an extreme Brexit in an ‘Unholy Alliance’.

“The Labour Party under Corbyn succeeded in attracting large numbers of idealistic young people,” said Vince, “They seduced by the abolition of student debt which they have since abandoned. This is the third time the Labour Party have done a U-Turn and it is the most cynical and the most blatant. They are now firmly under the control of Momentum. This leaves open the middle ground providing an opportunity for us to re-emerge.”

The Second issue was the EU. People hadn’t bought the second referendum as it was still too early in the process. “It’s beginning to happen,” Vince stated, “and will cement our position on what’s right and rationale in the EU. It will happen gradually, it will happen in a manner of ‘slowly rolling in’.”

Living standards were already compressed because of the devalued pound with the consumer feeling this in weekly purchases and other ways. The splurge of consumer credit was unsustainable and investment had largely stalled.

“People will start getting angry and disillusioned. As Brexit starts getting momentum people will being to understand the sheer complexity of what we have embarked upon.”

This could be illustrated by the debate on Euratom. “We need to keep Britain at the forefront of nuclear isotopes, nuclear fusion but all this activity is ruled by the European Court of Justice. Given the government’s line on the sovereignty of our own parliament and not wanting to be subject to the ECJ, this is now crumbling with the whole edifice having to be rebuilt. But this is just about 1% of what is being realigned through Brexit”, said Vince.

Civil Aviation was another area. “The whole basis on which the aviation industry functions, the safety, air traffic, consumer protection, all this is determined by EU Treaties. All this has to be renegotiated within a new framework.  It’s an almighty bloody mess!  Philip Hammond was saying we know it’s going to be a mess. But by proposing a further two year period before any change he is simply postponing the car crash. The more people become aware of it the more they will become attracted to our approach.  We need to stay in the Single Market, stay in the Customs Union, we need access to collaborative research and to maintain the environmental standards. If at the end of the process we lose those then the public have the right to a vote.”

The third reason concerned economic policy.  “Whether we like them or not the leading Tory and Labour party members of the recent past had been economic literati. They understood why the economy needed to be well run. In recent months this has gone out of the window. The Tories had no numbers in their Manifesto – as one person gibed, ‘the only numbers in it were the page numbers’. The Labour Party did have numbers in their Manifesto but they didn’t add up. The IFS and the Economist had chosen the Lib Dems as the only people who understood why sensible economics mattered and continues to matter. We need to fund our public services; we need to have the private and public services working together.

“I present myself today as an opposition Prime Minister…and given the opposition I think that is a very credible position. I am not here speaking for a ‘plucky 3rd Party’ that wants to gain a few seats. I didn’t come into Politics to be a moderate, sensible person able to deal in numbers and Balance Sheets operating at the margin. I came into politics to really make a difference. I have a soul as well as a brain.

“Most of you joined because you care about things. One of those things is rising inequality. We have inequality of the classes, between generations and between regions. We do not so much have an inequality of income but we have a real inequality of wealth. If we are serious about fairness then we must do this through tax. Inequality of generations is very significant. If you are a teenager today then you are likely to be poorer than your parents because house prices are out of control and you won’t be able to buy or to rent.

“This is an aspect of differentiation for our Party. So is education. Students rallied around Corbyn who captured their imagination. We made a big mistake in promising something we could not deliver. The truth is that although what we did was terrible politics it was sensible. Students don’t pay to go to university, they pay a form of graduate tax. Working classes are going to university but no one is listening. We do need to take a fresh look at how university students are funded. Not through pathetic populism but through a more genuine form of graduate tax and through maintenance payments abandoned by the Tories. We must also not forget about the 60% of young people going to Further Education. They matter – a great deal in fact with Brexit.

“This is your party – I’m just the Leader. I’d like to see the implementation of a Learning Account for young people to choose and decide how best to use it for themselves for their start in life. This would be a positive, visionary approach. It would fire the imagination.

“I’d like to finish with one thought. We are credible as a political force. This is why I emphasise my pitch as an alternative Prime Minister. We need to regain our place in local government and to start winning more Parliamentary seats again.  We will only do this if you are mobilised. We need more focus on technical side, on social and conventional media, and on communications of every type, if we are to make the comeback that I believe is possible.”

You can read Beverley Nielsen's thoughts on Vince's visit on her website.